Dr Kumarduth Goodary (Vinaye) joined MGI in 2001 as part time lecturer and is presently Senior Lecturer at the School of Indian Studies with about 17 years of experience in teaching and research at tertiary level. He has been the Head of the Language Resource Centre from 2013 to 2015 having initiated numerous projects like Curriculum development in all Asian Languages, creation of multimedia materials, ICT Handbooks among others. He completed his BA and MA in Hindi at the University of Delhi from 1995 to 2000. He completed his MPhil and PhD in the field of Mauritian Hindi Literature at the University of Mauritius in 2015. He holds a Master’s degree in Educational Leadership and Management from the University of Technology. He also holds a Project Leadership Certificate and has completed the African Leadership in ICT programme (ALICT), an initiative under the UN Task Force in 2014. Actively involved in online education, e-learning, emerging technologies and conducting workshops in ICT & Hindi, he manages his own academic websites (Moodle) and blogs. He has presented research papers both nationally and internationally. He was the President of AMGISS (Association of MGI Senior Staff). He also contributes at CPE level as Joint Chief Examiner at the Mauritius Examinations Syndicate. His interests vary from creative writing, leadership skills and motivational pedagogies to multi-disciplinary research. He is the presenter of Srijan – Your Rendez-vous with Culture, a weekly talk show programme aired on MBC 1 TV since 2015 with some 60 interviews done with scholars in Hindi. He has also acted in local serials and short films in Hindi, Creole, Bhojpuri, French and English. He has directed a short film Reperkision based on domestic violence and won 3rd prize at national level. He wrote a film on mother’s day named Merci which was projected at the Jaipur International Film Festival in which he played the lead role. He has been scriptwriting for numerous films and serials. Having authored Ashok ki Chinta, a contemporary play, he won best local writer and best actor awards for the National Drama Competition. He performed at the 8th World Theatre Olympics for the National School of Drama, India in Jaipur & Delhi in March 2018 for Ashok ki Chinta. aHe has been awarded at several occasions for his contribution to Hindi in Mauritius. 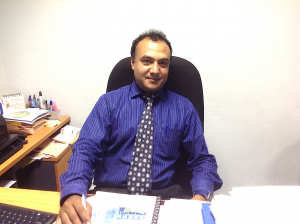